KINKID is Jose Hesse from Rio de Janeiro. His album ‘Colorine’ is the second installment of Rio-de-Janeiro-based newcomer electronic label DOMINA, following up on the debut of Manara that WITNESS THIS reported on a couple of weeks ago.

Other than Manara who gets a little more techy and dancy, KINKID is the slow ambient extension of DOMINA’s experimental electronica with almost every track containing vocals by the artist himself.

“You know you got my attention”, KINKID opens on the second track after the intro, and the shyness and fragility of his voice that strike you in that moment become a trademark across the whole album. His voice is present yet imperfect, his singing talent raw – you can tell he has not been through professional singing education. But it is this imperfection that adds a vulnerable touch to his beautiful melancholic music, putting you closer to his art and making it tangible.

Some of my other highlights include ‘Poga’s’ spheric vocal layers, the monkey-like noises in the first seconds of ‘Let It Go’, and the gnarly bass line that sets in soon after the guitar opens up ‘Like This’, the sixth song on the album.

For the engineering part KINKID had some famous support – the album has been mastered by no other than master of mastering Matt Colton himself, the man behind artists like James Blake, Coldplay, George Michael, Kanye West, to name a few.

KINKID’s music becomes most tangible when you witness him live, his music often being accompanied by impressive light installations. Make sure you check his video footage below when you are done reading the interview he gave WITNESS THIS the other day about the inspiration for his album, inner demons, and the Brazilian electronic music scene. “I have this room where all my equipment is set up. And there’s these two TV sets in the back of the room that are broken. I switch them on, and they make this crazy white noise. And then I light up some candles, and get into this really dark vibe, mellow and quiet. It’s like releasing some monsters inside of my head.”

WT: Your music seems to have its origin in live performances, am I right?

Kinkid: Exactly. I put this album together in live performances. I was performing at home or my friend’s house, mostly jammin’ with friends.

WT: How did you select the samples you used?

Kinkid: We used very few samples in this album. The beats are obviously sampled by computers but we recorded a lot of original instruments, synthesizers, keyboards, or guitars, even some snares. All the samples we had they come from live performances, we would cut ’em out, and take ’em to the studio where we would try to reproduce them as close to the live performance as we could.

WT: And what about the lyrics that are all over the album. How do you draw inspiration for those?

Kinkid: I have this room where all my equipment is set up. And there’s these two TV sets in the back of the room that are broken. I switch them on, and they make this crazy white noise. And then I light up some candles, and get into this really dark vibe, mellow and quiet. It’s like releasing some monsters inside of my head. I basically let out my past emotions. I have difficulties talking to people when I have a problem or something. I guess writing is just my way of getting rid of things. I can never write about something shallow. It’s always something deep or dark.

WT: What are your musical influences?

Kinkid: I’ve been listening to Mia Doi Todd, she’s an American singer and composer from L.A. I’m really into her voice. Samiam, Flying Lotus. I like this new electronic kind-of-hip-hop-no-rapping-kinda-deal. Then there’s this band called Boards Of Canada. Def has something to do with my work. And Chet Faker‘s new shit.

WT: Have you been making music before you started KINKID?

Kinkid: I have been studying classic guitar for almost four years, and I had a hardcore/punk rock band when I was a teenager. I’ve always been in love with music. It was something that kept me happy. I started with KINKID not even one year ago. I felt this really blank space in my chest, and I had to fill it with something. And I guess arts are always a really good way for you to express yourself. And music was the way for me to do it.

Kinkid: Rio always had this big scene of electronic music. But now it’s becoming more of a trend. People start to become more interested in artists. We’ve always had these big festivals in Rio, you know, those kind of rave parties where they play Psy-Trance. I guess, now it’s more like, people go to one club to see THAT specific DJ. People look up more information about the labels, about the tracks… People are researching more. It’s becoming bigger in a way that people get more information about music, and not only listen to it.
With our record label DOMINA we are producing and recording newcomer electronic music artists in Rio. We have no small independent labels [that are] recording people here, and we started this label because we found it is what Rio needs now. To drive the evolution of the electronic music scene here.

WT: How did your collaboration with Matt Colton come together, and what’s it like to work with such a veteran music engineer?

Kinkid: I was trying to research a guy to do the master and Matt’s name always came up whenever I googled. Me and Manara we had a few conversations about it, and we went through his portfolio and decided to work with Matt. Everything comes alive when he masters. He knows what he is doin’. It’s just incredible. He adds another sound perspective, another expression.

—
Visit KINKID’s bandcamp where you can download high-quality formats and donate to the artist (who wouldn’t love some fresh Reais for this shitload of work), and make sure you follow him on facebook if you like his vibe.

If you happen to be in Rio de Janeiro you can witness the release show of the album in Teatro Planetario beginning of July – stay tuned, it might be visually even more captivating than this: 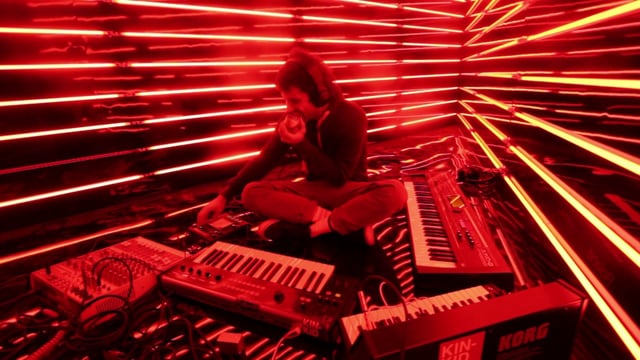