Ricky Whitlock is one of Carlsbad, California’s best known professional surfers. Aside from natural talent, what has gotten him to his present level are a strong work ethic and relentless drive.  Ricky Whitlock: L-1, T-12 is a mini-documentary by Tim Ryan and Type G Studios that shows how Whitlock used his personal drive to recover from a debilitating and life-threatening injury.

This past January, Ricky Whitlock was surfing Pipeline on the North Shore of Oahu as a warm-up for the Volcom Pipeline Pro. On a fairly standard 8-foot wave Whitlock was crushed by the wave’s lip and sent headfirst into the shallow bottom.  Narrowly escaping paralysis but with two fractured L-1 and T-12 vertebrae, Whitlock was left  with many uncertainties in life and his professional career.  This documentary film follows Ricky as he faces the challenge of mounting a comeback for himself and inspiring others along the way. 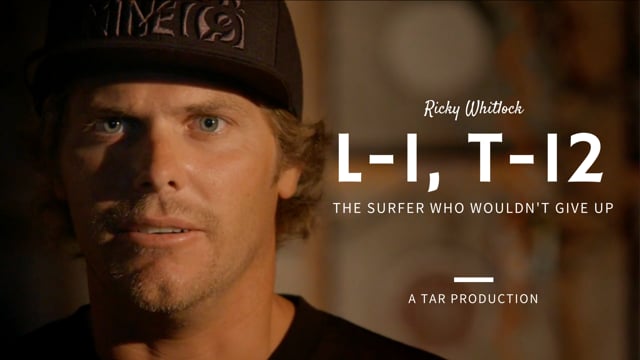