I have just finished interviewing Damien Elroy Vignaux and I am leaving his apartment. As I walk down the stairs, through the lobby and out through a propped open door onto the street, I realize that I have a huge obnoxious smile on my face. A couple walks by holding hands and I turn away from them strangely embarrassed. I realize I can’t hide my excitement, and I feel the most inspired I’ve been in a long time.

Damien Elroy Vignaux is on another level. You don’t need to read this to know that, just look at his photography, or his graphic design, or his paintings, or his films, or music videos, or commercials, or listen to his music, or go see him DJ, or hear him talk about art, or look up his agency, the list goes on.

Damien Elroy Vignaux has mastered more disciplines than most creatives would even dare touching in a lifetime.

I was told once by a mentor, that it’s important to never measure yourself against others, with Damien it’s crucial to remind yourself of this, because he is still so young yet has mastered more disciplines than most creatives would manage to barely touch in a lifetime.

Damien caught my attention a few years ago, I stumbled gratefully upon a short film written/directed/shot/edited by Vignaux that told the story of a french artist couple Supakitch and Koralie whom collaborated on stunning mural project together. The fluidity of the camera, complimented the strokes of the painting couple, in a way that it felt like it was done as a performance piece.

To claim that Damien Elroy Vignaux is simply a un-intrusive voyer in these projects would be ignorant. His presence and energy is felt by those he shoots, and in the case of Supakitch and Koralie his panning dolly shots seemed to invigorate their craft and motions. 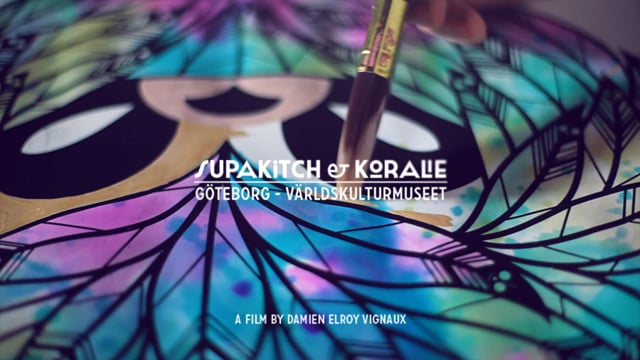 His models clearly feel a connection to him. There is something special in these moments, the way they look at his camera, the way their bodies turn towards him, in these images I see a story. Of course his subjects are professionals and they know how to pose, but are they actors? These images feel too real, too personal, too raw. What is happening in the moments before Milena pulls her shirt over her head and wraps it fearsly around her hips. Who’s bedroom does Bettina lay in as she gazes longingly up towards the camera. Intimacy, intensity, and the feeling that we are part of a private sexually charged moment keeps us engaged. With the narrative set in the bedroom, or sun bathed living room, and with the girl with her back to us, shedding a glance over her shoulder, it’s easy to imagine ourselves standing in that room, playing a part in the story that unfolds with each new photograph in the series. I find myself in Damien’s apartment, after he graciously accepted my offer to interview him. Damien sits on the couch across from me, and his friend, creative partner, business partner, producer, and musician Guillaume Monet sits next to him. Laptops sit out on the coffee table, a pair of sleek Pioneer turntables sit across the room. A small portable keyboard sits on the table, and photos, posters and paintings adorn the walls. Above Damien’s desk hangs a large chalkboard, it’s exactly as I would imagine a multi-faceted creatives board to look; scribbled with notes and ideas in the form of words, pictures and icons. Damien Elroy Vignaux in afternoon light at his home. As if on cue as Damien begins to speak, the sun pours in through his large windows, the afternoon glow blanketing the room. Music, paintings, films, photos, ideas have been spawned from here and almost all of them have become tangible. I get a shiver of excitement just being here,  the space whispers stories of late night creation. My gut says it isn’t a place where drunken, drug induced ‘artists’ ramble on about ideas that never take form, instead it is a clear path of artistic conception that continuously reaches the outside world on an astounding level.  I get the impression Damien is completely humbled by it all. “I shoot an image in my home of a model and in one week it has been shared 20,000 times. It’s very cool.”  The nature in which Damien Elroy Vignaux creates his art feels completely organic. Even when it comes to retouching his images, Damien seems to almost feel guilty, “When I’m retouching, I never feel like I’m working. It’s so fast and it’s a method to release stress.”

I ask Damien if he ever imagined that his work would be so widely seen and he shakes his head smiling. He never imagined that people would react like this and so quickly. The video Superkitch and Koralie reached over 1 million views recently, and his photos spread through tumblr like wildfire. The formula seems to have developed naturally for him, and it’s never been about getting views. I get the impression that the creative process for Damien comes so easily, and his relatively simple methods have proven to be more powerful than ten thousand overly produced studios.

We are now standing in his studio. I recognize the tall windows, the rich wood floor, the chain used to secure many of the pastel backdrops Damien has used in some of his most well known images. His deconstructive style lends itself perfectly to this space. The light is so elegant and natural, the dust particles create depth, and the soft features of the wall and floors feel inviting to the sensuality that has been captured here. I ask him about the light reflections and lens flares he achieves in some of his images, and he moves over to his desk and picks up a piece of a broken CD case. “This is the secret.” He laughs. As we stand in front of his closet, he begins to pull out shirts and clothing that has been used in his work. “I like to style a lot of the shoots myself, to give me control of the feeling.” Damien continues, “I can use a mans shirt to make it look even more like they are wearing their boyfriends stuff. Then it is even more sexy, because you have this projection that they are waking up in the morning, and they put your shirt on.” Although Damien makes these scenes seem very intimate and spontaneous, there are many different elements that must align in order to create at the level he does. He references the earlier days of shooting models, when he was less confident and the models he was using were not as good. “Now I have better agency contacts, and now its really fluid. The models are very good and most of the shoots are only a few hours. If something isn’t working, I change the light, or we try a different pose.”

As we sit back down in the living room, Damien turns his laptop towards me and he plays a video that he filmed and edited called Duple. It stars Tinmas Kato, and the original score was created by Guillaume who now sits on the couch across from me. The film is an eerie, haunting, yet sexually charged story that is abstract yet narrative. Damien and Guillaume worked on the project together. “The thing is,” Damien says as he presses play, “I imagined a totally different sound for this film, but when Guillaume created this, it was perfect and it made it even better. The best stuff is like that, it brings the story elsewhere, it works in a way we never could think of without working together.” 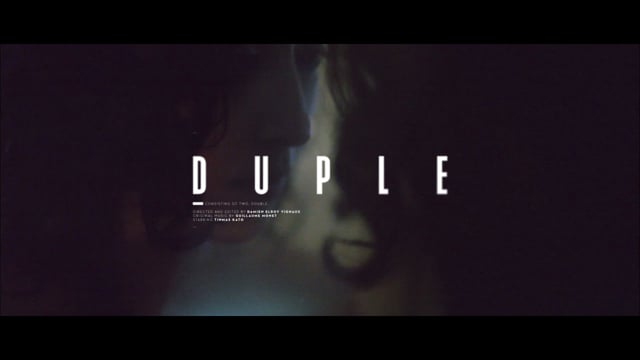 DUPLE from elr°y on Vimeo.

What Guillaume and Damien have collaborated on so far is only a glimpse at what is yet to come. In between Guillaume’s production company, his band, Damien’s DJ’ing (he played at Katerholzig in Berlin last weekend, one of the largest, most well known house music venues in Berlin) his graphic design, his painting, photography, film, I ask them if they worry about diluting their work too much by being involved in so many different disciplines. “People are always trying to segment the medium.” Damien sits back on his couch, and looks down at his hands, loosely cradling his cup of coffee, “People say it’s different to do photography, music, or illustration, or film. The way we see it is we are storytellers. Sometimes it’s going to be more efficient to make a track, or an illustration, or video. When we do art direction, that’s exactly what we give them. If someone wants to do a music video, sometimes it may be more efficient to do a rebranding before we do the video.” Guillaume smiles and I can see him nodding his head in agreement as Damien continues, “I don’t even feel like I’m jumping around from one domain to another, it’s just different tools to translate an idea.”

What Damien has helped in creating is a network of some of the most talented people on the planet. It doesn’t feel forced, or vain, or superficial. It seems directly the opposite; natural, relaxed, positive, and driven. They don’t see what they do as work, instead they are living their craft, motivated by each other and simply the act of creating.