Each screening at Sisyphos will feature live performances, a curated program of Erika’s latest short erotica, including a premier with subversive cult filmmaker, Bruce LaBruce, and director Q&A. Supported by Berlin Film Society, these cozy evenings invite us to to explore and reflect on sex positivity.

Ahead of her arrival I spoke with Erika about her trailblazing XConfessions project, pairing with Bruce LaBruce and the importance of the female gaze in the adult industry. XConfessions is the first of its kind, what made you want to connect so intimately with your fans? What have you discovered from this process?

Sex, in any regard, is an intimate experience and that should extend to all things relating to the adult entertainment industry, too. By giving people images they can relate to, they have a positive interaction with adult cinema and a better and healthier experience altogether. Representation is very important across all media not just mainstream films, and adult films can help encourage someone’s personal sexual exploration if they see positive images of people similar to themselves reflected back at them. And that’s the end game: sex positivity. On top of that, the confessions are so exciting and adventurous. Fantasies are multiple and diverse! That’s the fun part, there are never ending fantasies for me! I read so many new fantasies per day, the ideas are endless! I receive different kind of desires and kinks. I have seen how amazingly creative and diverse some fantasies are. Sometimes they can also leave a lot to the imagination and that can be super exciting, too.

With many XConfessions I have felt intrigued about kinks that I had never even thought about. The confessions admitted to the website are specific and personal to someone and exciting to other people, this isn’t allowed to happen in mainstream productions where they have a limited creative processes. There isn’t a part of XConfessions that is boring, from the very moment you read a brilliant confession to editing the final cut of the film. I really get to explore creativity as a filmmaker, and as a woman. The Hollywood industry is so dependent on sales and numbers for example, while the only thing I have guiding my productions is the most natural, old and wonderful thing imaginable: sex. What has been your favourite video so far in the X-Confessions series?

I could imagine myself in the rainy season with euphoric relieved people dancing in the streets and laying down naked on my terrace while the water touched me. I liked it so much I shot it last month! The short film is coming to XConfessions in a couple of months and I could not be happier with the results! What’re some of the things you take into consideration when you’re choosing which XConfessions submission will come to life?

I approach each film as an incredible creative task, taking every aspect of the film into consideration. I have three key elements: confessions, locations and casting, and working alongside my team, we solve the puzzle for each XConfessions volume. Sometimes I will get a confession that reads like a really steamy liaison but when put into proper consideration I realise it may be not work on screen.

It’s not enough to only think about the sex when making a film, attention to detail can really make or break a film. The lighting, the wardrobe, the make up, the music, the locations, the catering, the scripts, the contracts, the postproduction, the color correction, the cliches we avoid, the different body types we cast, it’s every little detail, it’s a dedicated approach to sex on the screen and the script has to be up to par. Mainstream pornography has dangerous habit of reinforcing negative stereotypes, perpetuating violence against women, however you remove these from your films and portray sex in a realistic, healthy and fun manner. I’m wondering, what are some of the positive conversations you’ve seen flourish since you entered the industry? What conversations would you like to see happen more often? I also hear conversations about a media culture that blocks out some discourses, and a society that is completely lazy about debating sexual education or to implementing initiatives that are real and effective when it comes to eradicating violence and negative sexual behavior, while continuing to normalize violence and sweeping the rest under the rug. But I don’t hear them enough. Sexual objectification and censorship of the female body and its sexuality in mass media and social networks for instance is a constant in a woman’s life. However, when a woman takes ownership, takes decisions over her own body and expresses herself the way she wants, she is censored.

My films exist purely because of creativity. I don’t make films just for the sake of it, using the stereotypical performer and the stereotypical visuals and content. The inspiration for XConfession films comes from the fantasies and imagination of our audience which I then reinterpret. So from the word ‘go’, there is this driving force of unadulterated creativity, because without the confession and the minds of others, the film wouldn’t exist. Then I use the best team of performers, editors, directors, film crew and everything else. All the women on my team are artists, no matter what they do and so the end result is yes, very very sexy but also a beautiful piece of moving art. The event in Berlin will feature your short erotica films, along with a film from Bruce LaBruce, what can we expect from this powerhouse pairing?

Bruce LaBruce is a very controversial filmmaker and the film I produced, ‘Refugee’s Welcome’, is in keeping with that. It’s a very moving erotic short film with a strong social and political approach. A portrait of the integration problems resulting from migration of refugees from the war in Syria, that is happening in german society as well as in Europe in general. According to the UN Refugee Agency, there are almost 5 million Syrian refugees in exile in the world. Germany has given asylum to 1.170.000 of them, a fact that has sparked both record numbers of people volunteering while at the same time an increase in hate crimes by racist, far-right xenophobic movements. The short film, tells the story of a night in the life of a newly arrived Syrian Refugee in Berlin, who after suffering a hate crime, will have an encounter where neither origins nor skin color will matter but only compassion, understanding and the universal rules of attraction. It’s an intense watch, but ultimately a very fine piece of cinema. The open air screenings will take place over two days, opening at Sisyphos on Wednesday 12th and closing on Friday 14th with an after party. Tickets are available on Resident Advisor and are limited, with advanced purchase only. 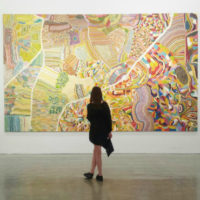 Alice Dundon is a Berlin-based writer and photographer. A lover of art, photography and innovation, she explore a multitude of topics under varying lenses, and strives to give a platform with her writing.