as·phyx·i·a is an experimental film that explores body movements with digital motion capture technology. For the recording the creators chose one of mankind’s oldest forms of expression – dance.

Artists Maria Takeuchi and Frederico Phillips used simple Xbox One Kinect sensors to capture the movements of dancer Shiho Tanaka. The collected data was then digitally rendered into the beautiful result you can witness below.

On their project website the artists explain their experiment in more detail. They state it was “an effort to explore new ways to use and/or combine technologies and different fields in an experiment without many of the common commercial limitations. The performance is centered in an eloquent choreography that stresses the desire to be expressive without bounds.

Motion data was captured using inexpensive sensors and that data paved the way through an extensive number of steps. Once all the scanned point cloud data was combined, that was then used as the base for the creative development on the piece. A series of iterative studies on styles followed and several techniques and dynamic simulations were then applied using a number [of] 3D tools for various results.”
(source: project website)

Frederico himself sent me this impressive piece last night, so we had a chat and I asked the artists a few questions.

Witness the dance kinetics study as·phyx·i·a, and read on below for an interview. 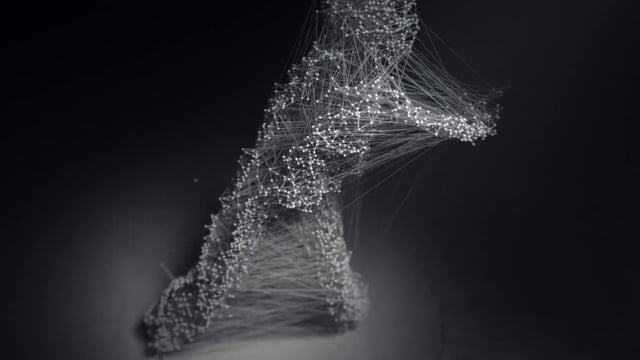 What the artists had to say about their experimental dance kinetics study.

WT: What was your personal motivation behind this project?

F/M: There was a need to do something exploratory and experimental that satisfied our own curiosity and helped us answer some ‘what ifs’ and ideas we had previously contemplated. By allowing the physical back into the digital we had hoped the result would translate itself in a way people could relate to, even though it was fully computer generated.

WT: Did you experience something along the way that you did not see coming? Any surprises?

M/F: It took us about 5/6 weeks to complete and the longest part was actually waiting for the rendered sequences (over 5000 frames) as we only had 5 computers rendering the whole project. There were many challenges as most of the tasks were new to us, such as finding suitable ways to combine and clean the data captured, producing a sound track that could help drive the visuals and coming up with a look that connected with the original concept or selecting approx. 3 minutes of performance from the original 30 minutes we captured.

WT: What’s your educational background and where are you heading professionally?

M/F: Frederico studied digital media at hyper island, and 3D was not his main major. Frederico is working at the 3D advertisement/commercial industry, and would like to direct and lead creative projects more. Maria has been self-taught musician through experiencing playing in bands, collaborating with artists and producing her own projects. Maria wants to deeply explore tonal theory and digital experimentation of audio+visual to inspire people.

WT: Where from do you draw inspiration – in general, and for this special project?

M/F: The visual representation of the character was tied with both the name of the project and to the choreography as it looked to convey of feeling of entrapment.
This project was very much about expression, whether that was through exploring new ways to do things visually or finding ways to combine our strengths in music, dance and visual art. The idea developed itself somewhat naturally as we had hoped for, we experimented a lot and really tried to manipulate the data and mood as we went.

WT: What’s the most anticipated artist or artistic work to watch out for in 2015?

M/F: We anticipate the art using coding to experiment new ways in technology, such as the art visual reacting with audio, capturing nature/analog/physical informations to digital.

WT: Well done. Thanks a lot for your time guys! 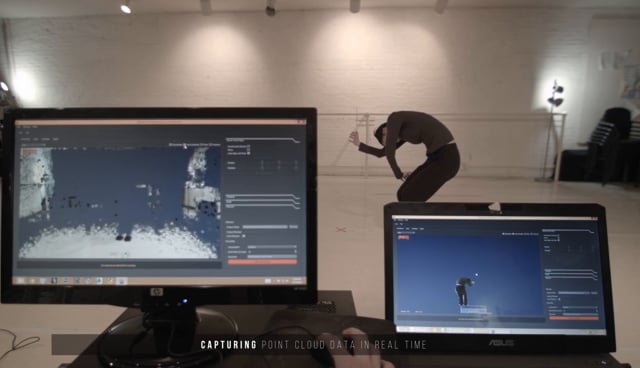